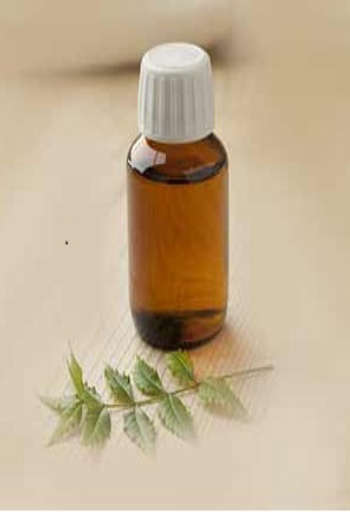 What is Neem Oil?

Neem oil is a natural vegetable oil extracted from the seeds and fruit of the neem tree. Neem trees are also known as Margosa trees that grow in India and parts of southeast Asia. All parts of the neem tree such as wood, bark, and flowers have been used for thousands of years by Indian cultures, neem oil’s medicinal properties are found in the plant’s seeds and fruit.1,2

Neem oil can be light to dark brown in color, depending on the method of extract, and is very bitter in taste due to its triterpenoid and triglyceride compounds. Neem oil has a strong odor similar to sulfur and garlic. Cold-pressed, organic neem oil is the preferred health product as it’s not contaminated by solvents or petrochemicals used in the insecticide neem oil market.1

Neem oil is one of the most common natural insecticides known. It contains azadirachtin, a chemical compound not harmful to humans, plants or animals but deadly to insects. Azadirachtin is also effective in killing bacteria, fungi, mites and other parasites on the human body.1,2

While neem oil is non-toxic, most neem oil applications are topical and not ingested.1,2

Neem oil health benefits include being moisture-rejuvenating, antifungal, antibacterial and anti-parasitic properties. Other beneficial components in neem oil are oleic acid and linoleic acid, both being fatty acids proven highly beneficial to skin. It is also extremely high in vitamin E making neem oil for skin an effective treatment.1,2

Neem Oil Side Effects and Precautions

There are no known serious neem oil side effects. It’s been used for thousands of years for skin ailments, beauty products and even as a proven contraceptive.

Caution should be used by pregnant and nursing mothers as well as women planning to conceive due to possible neem oil side effects. 1,4