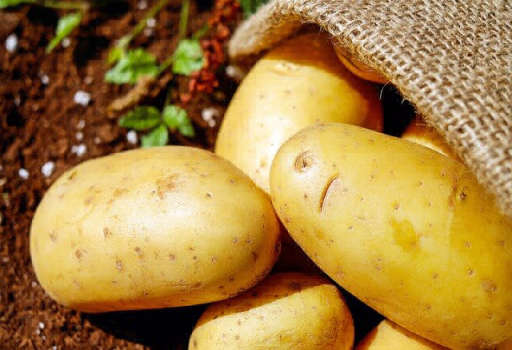 Potatoes are a vegetable used in many kitchens around the world as a staple food. They’re harvested year-round in areas across the globe and belong to the same family as peppers, tomatoes, and eggplant. If left to flower and fruit, the potato plant features a fruit similar to a tomato; however, this fruit is inedible. The part of the potato plant eaten resides underground. It’s a swollen part of the stem called a tuber.1 It’s this portion that’s referred to as a “potato” and is sold in stores world wide.

There are about 100 varieties of potatoes, including white, red, and yellow.1 They can be baked into a variety of dishes, including soups, casseroles, mashed potatoes, potato chips, and French fries. Potatoes pair well with seasoning herbs like garlic or rosemary.

Potatoes are used as ingredient in many junk food items, such as potato chips and French fries. Because of that, they get a bad reputation. However, when baking raw potatoes at home, they can have many health benefits. Potatoes are low calorie, high fiber foods featuring high amounts of potassium, manganese, copper, niacin, phosphorus, dietary fiber, and vitamins B6 and C. Potatoes also contain many antioxidants, such as carotenoids and flavonoids, to help protect against conditions like cancer and cardiovascular disease.1

Potato benefits also include blood pressure-lowering properties thanks to compounds in them called . The rich vitamin B6 content provides many benefits, including support of body cells, the brain, the nervous system, and the cardiovascular system. To get the most potato benefits from the vegetable, don’t peel them. The skins contain many of the plant’s nutrients, including 60 percent of the potassium available in each potato.1,2

Among potato uses, they can also be used topically to treat the following conditions:

Potato Side Effects and Precautions

Potatoes are considered safe to eat and to use topically. However, it’s important to prepare them correctly. Be sure to wash and scrub potatoes before cooking them to remove dirt. Also make sure that the sprouts, or “eyes,” of the potato are removed before eating or cooking them. The sprouts contain a poisonous ingredient called solanine that is toxic even in small amounts. This poison can also be found in green potatoes, which occur after the plant has been sunburnt.2,3 Do not eat green and always throw out the sprouts.

If you or a loved one eats a part of potato containing solanine, seek medical attention immediately. Potato side effects may include vomiting, abdominal pain, diarrhea, fever, headache, and more. These symptoms can be delayed for up to 8 to 10 hours.3 While this sounds scary, potatoes with their sprouts removed are safe to eat.

See comments on the community forum

Read what people are talking about this product click here